And Away We Go 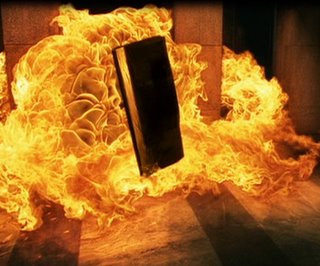 Top White House aides are privately discussing the future of Karl Rove, with some expressing doubt that President Bush can move beyond the damaging CIA leak case as long as his closest political strategist remains in the administration.

While Rove faces doubts about his White House status, there are new indications that he remains in legal jeopardy from Special Counsel Patrick J. Fitzgerald’s criminal investigation of the Plame leak.

You mean that Adam Levine thing was all bullshit? No, say it ain’t so!

The prosecutor spoke this week with an attorney for Time magazine reporter Matthew Cooper about his client’s conversations with Rove before and after Plame’s identity became publicly known because of anonymous disclosures by White House officials, according to two sources familiar with the conversation.

What? Did Luskin lose his gig doing exclusive legal commentary for every major outlet in town? Sweet Mary mother o’ Bill O’Reilly on the cross, I almost don’t know what to make of a lawyer who doesn’t want to be cited as an “anonymous source.” I’m not smelling a trend.

Fitzgerald is considering charging Rove with making false statements in the course of the 22-month probe, and sources close to Rove — who holds the titles of senior adviser and White House deputy chief of staff — said they expect to know within weeks whether the most powerful aide in the White House will be accused of a crime.

Sort of our very own version of “boxing day,” no doubt.

If Rove has no real enemies in the White House it’s only because he ate them all for breakfast. Anyone that dictatorial and egotistical is probably not one who “plays well with others.”

Many mid-level staffers inside have expressed frustration that press secretary Scott McClellan’s credibility was undermined by Rove.

Fear not, young mid-level staffers. We’ve long known he was full o’shit. We kept repeating it because it was funny not because it qualified as a “revelation.”

Fitzgerald made it clear to Rove’s attorney in private conversations last week that his client remains under investigation. And he signaled the same in his indictment of Libby on Friday, in which he identified a senior White House official who had conversations related to the Plame leak as “Official A.” White House colleagues say Rove is clearly “Official A,” based on the detailed description.

That kind of pseudonym is often used by prosecutors to refer to an unindicted co-conspirator, or someone who faces the prospect of being charged. No other administration official is identified in this way in Fitzgerald’s indictment.

As a rule I don’t bash my own side and won’t start now, but to everyone floating the “Fitzgerald’s done” story — you really didn’t have any way of knowing that, just a suspicion. And we had ours. You may well be right. And we may well be wrong. But it’s not looking good for either you or Rover at the moment.

Rove was interviewed by FBI agents in the fall of 2003. He subsequently testified four times before the grand jury, which legal experts say is an unusually large number of appearances given that he was told he was a subject of the investigation and his actions were being scrutinized as possible criminal violations.

Sources close to Rove say one pressing problem for him is that he initially did not tell investigators he had a conversation with Cooper, then he produced an e-mail to a colleague in which he reported he had spoken to Cooper. He told the grand jury he could recollect very little of the conversation other than a discussion of welfare, sources said.

Kinda like Scooter’s story that he didn’t remember the VP told him about Plame, then he did? Yeah. Fitzgerald bought one too, as I recall.

Go on! Next you’ll try to tell us all that gay bashing was just for show and the only time he sings Nearer My God to Thee is when he’s snorting coke off some stripper’s ass.

Political pressure is rising from the outside. A few conservatives have suggested it is time for Rove to go. William A. Niskanen, chairman of the libertarian Cato Institute, told Reuters on Tuesday that Bush has to “sacrifice” some top aides starting with Rove, who he said has given good campaign advice but poor guidance on getting legislation passed.

Forget about circling the wagons, the vultures beat ’em to it.

And Away We Go