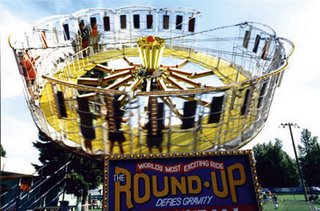 — Hardball looks like it will be a doozy. David Schuster is digging in to the Cheney angle on the lead-up to the war and the Libby indictment. You can catch Hardball on MSNBC at 5 pm ET and 7 pm ET.

— Lawrence Wilkerson will appear on the NewsHour with Jim Lehrer on PBS. (Check local listings, but where I am it comes on at 7 pm ET.) [NOTE: Kate says that Wilkerson will be on tomorrow night, not tonight. Just FYI.]

— Jimmy Carter will be on Larry King this evening, discussing mis-use of religion for political purposes and undoubtedly the CIA out-of-country prisons issue, among other things. (That’s on CNN at 9 pm ET.)

— And a reminder, Scooter Libby will be arraigned at 10:30 am ET tomorrow morning.

If anyone has more guest information for other shows, let me know and I will update here for everyone.

Dan Froomkin’s White House Briefing in the WaPo is chock full of goodness today, including these great questions from WaPo reporter Peter Baker:

“I can think of lots of questions to ask the president when he deems to take them again,” Baker wrote.

“1) Did Karl Rove tell you the truth about the CIA leak and did you tell the American people the truth?

“3) You promised in your first campaign to clean up Washington. ‘In my administration,’ you told voters in Pittsburgh in October 2000, ‘we will ask not only what is legal but what is right, not what the lawyers allow but what the public deserves.’ Do you think your White House has lived up to that standard in this episode?

“4) You promised to fire anyone involved in the leak and your spokesman said anyone involved would no longer work in the administration. Last week’s indictment makes clear that Official A, identified as Karl Rove, was involved. Are you going to fire Karl Rove?

“5) Even giving Scooter Libby the benefit of the doubt legally, do you approve of the conduct that has now been documented?”

Definitely a great read, as always. Yesterday’s WHBriefing was excellent as well — didn’t get to post a link yesterday, so for anyone who missed it, you can find it here.

Steve Clemons has some great information on Rumsfeld, Powell and Larry Wilkerson in the Washington Note. He also points to a great article on Addington which you can find here.

Someone is finally questioning Rove’s continued security clearance in detail in the MSM. Jonathon Alter addresses this issue in Newsweek. A tantalizing tidbit from the article:

That means the only proper answer to a reporterâ€™s questions about Joseph Wilsonâ€™s wife would have been something along the lines of, â€œYou know I cannot discuss who may or may not be in the CIA.â€ The indictment makes clear that this was not the answer Official A provided when the subject was discussed with reporters Bob Novak and Matt Cooper.

Here’s hoping we get a few answers on this front soon, considering every other human being in the country would have had their clearance yanked before they left the building the day that anyone found out they were involved. (According to the leaks, that would be some time in 2003 that Bush learned. Clock is ticking…)

Murray Waas updates the story that keeps on giving from last night’s Democratic cojone-finding extravaganza. Seems the Dems aren’t ready to trust the GOP leadership to follow-through, nor are they prepared to just let the issue go without oversight. Waas has the goods on some potential upcoming moves on this issue.

It’s great that the questions are finally being asked about all of this. Wish it would have happened earlier — say 2003 — but better now than never.

UPDATE: Mrs. K8 reports that Joe Wilson will be on Keith Olberman’s MSNBC Countdown show this evening as well. That’s on at 8 pm ET, following Hardball.

UPDATE #2: Crooks and Liars has an hilarious clip from Imus this morning. Rick Santorum is babbling on with Imus and then tries to crack a joke about Imus’ wife and a three-way. Hello?!? Santorum — the gift that keeps on giving.