What Does the President Know and When Will He Know It? 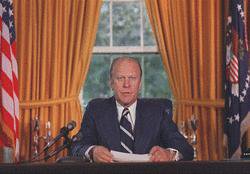 In his impressive presentation of the indictment of Lewis “Scooter” Libby last week, Patrick Fitzgerald expressed the wish that witnesses had testified when subpoenas were issued in August 2004, and “we would have been here in October 2004 instead of October 2005.”

Note the significance of the two dates: October 2004, before President Bush was reelected, and October 2005, after the president was reelected. Those dates make clear why Libby threw sand in the eyes of prosecutors, in the special counsel’s apt metaphor, and helped drag out the investigation.

As long as Bush still faced the voters, the White House wanted Americans to think that officials such as Libby, Karl Rove and Vice President Cheney had nothing to do with the leak campaign to discredit its arch-critic on Iraq, former ambassador Joseph Wilson.

He then goes on to note what many have noted, that the administration counted on the fact that reporters would shield their actions from scrutiny.

(Digby reminds us of Dubya’s admonitions to the media from October 2003, “I have no idea whether we’ll find out who the leaker is, partially because, in all due respect to your profession, you do a very good job of protecting the leakers.“)

The administration, says Dionne, is trying to spin the story that Libby is a lone wolf in a pack of boy scouts. Nice try, Dubya:

You can tell the president worries that this won’t work, because yesterday he did what he usually does when he’s in trouble: He sought to divide the country and set up a bruising ideological fight. He did so by nominating a staunchly conservative judge to the Supreme Court.

Dionne urges Democrats to stand up to the White House and refuse to vote on Alito until Bush and Cheney ‘fess up about their role in TraitorGate. And they need to pledge to the American people that they are not conspiring to obstruct justice:

Fitzgerald has made clear that he wants to keep this case going if doing so will bring us closer to the truth. Lawyers not involved in the case suggest that the indictment was written in a way that could encourage Libby, facing up to 30 years in prison, to cooperate in that effort.

But there is a catch. If Libby, through nods and winks, knows that at the end of Bush’s term, the president will issue an unconditional pardon, he will have no interest in helping Fitzgerald, and every interest in shutting up. If Bush truly wants the public to know all the facts in the leak case, as he has claimed in the past, he will announce now that he will not pardon Libby. That would let Fitzgerald finish his work unimpeded, and we would all have a chance, at last, to learn how and why this sad affair came to pass.

As I’ve said before, I’m not sure how much of a carrot a pardon will actually be to Libby. As the multitude of scandals that have plagued the GOP continue to play out in the press, the possibility that the Democrats would take control of either or both houses of congress becomes ever more plausible, and if getting an oval office bj is grounds for impeachment then “fill in the fucking blank” White House scandal certainly is. Is Scooter willing to risk the rest of his life that after three years of microscopic media scrutiny and horrendous legal bills Dubya will still be around to pardon his ass?

Wow, that is an awfully big gamble. But every Democrat should be screaming at top volume on every talk show that Preznit Horse Cranker and his evil buddy Big Time need to come clean and pledge they will not gum up the works any more than they have.

Side note: story on ABC news about Matt Cooper saying Libby told him Plame was “a covert CIA operative” is bullshit. ABC will be changing the story soon.

What Does the President Know and When Will He Know It?