Cry Havoc and Let Slip the Dogs of War 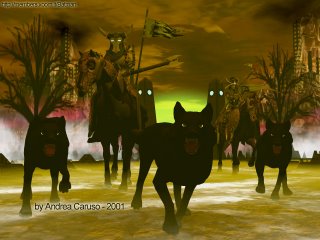 Pat Roberts has long said that the Senate Select Intelligence Committee just didn’t have the time to take up Phase II of their investigation into pre-war intelligence.

The chairman of the Senate Select Committee on Intelligence could hold hearings on the use of espionage cover soon after the U.S. Congress returns from its August recess, said Roberts spokeswoman Sarah Little.

Little said the Senate committee would also review the probe of special prosecutor Patrick Fitzgerald, who has been investigating the Plame case for nearly two years.

That came right on the heels of the announcement that Rover was Matt Cooper’s source by Lawrence O’Donnell.

No time to look into why 2000 Americans lie dead, but plenty of time to look over Fitzgerald’s shoulder. Fitzgerald was smart enough to go to school on Lawrence Walsh’s mistakes with Iran Contra and eventually sent a letter telling everyone in congress to get off his back, but it’s not like Roberts didn’t try. He’s a political tool who has abused his role of chairman of the committee to act as a figleaf for BushCo. It’s about time somebody started screaming about it at top volume.

Cry Havoc and Let Slip the Dogs of War