If he didn’t want them sheared, he
wouldn’t have made them sheep 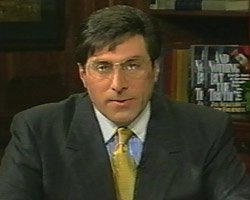 Via Byron York (of all people) we find out that God’s lawyer is pulling down some serious mammon, if you know what I mean:

… through the ACLJ and a string of interconnected nonprofit and for-profit entities, has built a financial empire that generates millions of dollars a year and supports a lavish lifestyle â€” complete with multiple homes, chauffeur-driven cars, and a private jet that he once used to ferry Supreme Court Justice Antonin Scalia.

That less-known side of Sekulow was revealed in several interviews with former associates of his and in hundreds of pages of court and tax documents reviewed by Legal Times. Critics say Sekulowâ€™s lifestyle is at odds with his role as the head of a charitable organization that solicits small donations for legal work in Godâ€™s name.

For example, in 2001 one of Sekulowâ€™s nonprofit organizations paid a total of $2,374,833 to purchase two homes used primarily by Sekulow and his wife. The same nonprofit also subsidized a third home he uses in North Carolina.

At various times in recent years, Sekulowâ€™s wife, brother, sister-in-law, and two sons have been on the boards or payrolls of organizations under his control or have received generous payments as contractors. Sekulowâ€™s brother Gary is the chief financial officer of both nonprofit organizations that fund his activities, a fact that detractors say diminishes accountability for his spending.

According to documents filed with the Internal Revenue Service, funds from his nonprofits have also been used to lease a private jet from companies under his familyâ€™s control. And two years ago, Sekulow outsourced his own legal services from the ACLJ, shifting from a position with a publicly disclosed salary to that of a private contractor that requires no public disclosure. He acknowledged to Legal Times that his salary from that arrangement is â€œabove $600,000â€ a year….

If the figure for his salary is accurate, Sekulow would be the 13th-highest-paid executive of a charitable organization in the United States â€” just below the United Wayâ€™s CEO, Brian Gallagher â€” according to a ranking by the American Institute of Philanthropy, another charity watchdog group.

The rest of the article can be found here.