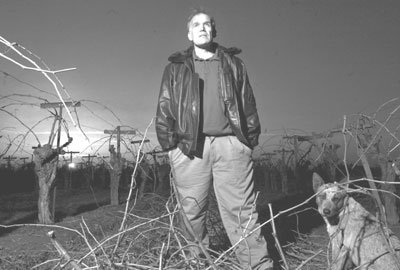 Cry havoc and let slip the dogs of academia…

Victor Davis Conan the Tree Farmer Hanson wants the Steely Eyed Rocket Man to go Full Metal Strongman on the country in order to fulfill his Clash of Civilizations wetdream:

For good or evil, George W. Bush will have to cross the Rubicon on judicial nominations, politicized indictments, Iraq, the greater Middle East, and the constant frenzy of the Howard Dean wing of the Democratic party â€” and now march on his various adversaries as never before. He can choose either to be nicked and slowly bled to death in his second term, or to bare his fangs and like some cornered carnivore start slashing back.

…he should call in top Republican senators and the point people of his base â€” never more needed than now â€” and get them to agree on the most brilliant, accomplished, and conservative jurist possible. He should then ram the nominee through, in a display to the American people of the principles at stake.

George Bush also should begin addressing his most venomous critics at home, by condemning their current extremism. He must explain to the nation how a radical, vicious Left has more or less gotten a free pass in its rhetoric of hate, and has now passed the limits of accepted debate.

Can reeducation camps and gulags in Wyoming be far behind?

As James Wolcott put it:

This will no doubt pass the limit of accepted debate, but allow me to part with the following sentiment: Fuck you, Victor Dave. The limits of accepted debate have already been trampled into mud and splinters by Rush Limbaugh, Ann Coulter, Michael Savage, David Horowitz, Michelle Malkin, and the Swift Boaters, among others, about whose rhetorical extremes you’ve never made a peep. Moreover, this conflating of Howard Dean Democrats with Islamofascist hate speech is McCarthyism at its most unrefined. Truth is, Democrats have been remarkably watery and ineffectual when it comes to the Iraq war, as Arianna has lamented (and when a Greek goddess laments, it’s like thunder from the mountaintop).

Hanson’s use of the phrase “the limits of accepted debate”–he probably meant acceptable debate–has the authoritarian ring we’ve become used to on The O’Reilly Factor and other Fox news shows, where the word “treason” is thrown at every sharp note of dissent.

Not that I’m worried about an authoritarian crackdown. I think the Bushies are now too deep into the crackup stage to attempt and enforce a crackdown on opinion. The very vehemence of Hanson’s report is a sign of impotent frustration. He’s not getting his way and it seems less likely he’s going to get his way, so he’s hankering for a showdown that will at least provide theatrical catharsis.

Which you may remember from here:

Otter: Dead! Bluto’s Victor Davis Hanson is right. Psychotic, but absolutely right. We gotta take these bastards. Now we could do it with conventional weapons that could take years and cost millions of lives. No, I think we have to go all out. I think that this situation absolutely requires a really futile and stupid gesture be done on somebody’s part.
Bluto Hanson: We’re just the guys to do it.

And if there is something futile to be done, well, Hanson’s got just the guy to do it:

In the last six months we have heard from various demagogues â€” though they are recognized as such due to their prominence in the media â€” that we were waging nuclear war in Iraq (Cindy Sheehan), that there was cannibalism in New Orleans (Randall Robinson), that George Bush and Dick Cheney should be shot (the novelist Jane Smiley) or executed (Al Franken). Alfred Knopf has published a book about the theoretical assassination of the president, and the Nazi slur is now commonplace in Democratic circles, where a Senator Dick Durbin or Ted Kennedy slanders American soldiers as akin to either Saddamâ€™s torturers or even Nazis and Stalinists. The case needs to be made that we are seeing a new paranoid style â€” but from the Left, whose opponents are not to be out-argued, but rather deemed worthy of death or demonization as Nazis. The recent eclipse of George Galloway â€” due in no large part to Christopher Hitchensâ€™ lonely and underappreciated pursuit of his perfidy â€” reminds us how hard these reprobates finally will fall.

All of these issues are interrelated. If the president can win the hearts and minds of the American people on one theme, the others will fall into play. The more the president talks of principle and values, the more he can do so with zeal, and yes, real passion and occasional anger.

Because when everyone from the media to the novelists to mothers of dead soldiers to publishers to comedians to Senators to the CIA (see below) to a public that has grown tired of an endless war are out to get you…they’re the paranoid ones.

With his buddy Scooter spending his days boning up on the value of a carton of cigarettes at the correctional institute where he will soon be making his bunk, Hanson sees his influence slip-sliding away and all that he has to look forward to is a future of tending to his tree farm and maybe, like an aging Don Corleone, he will spend his final days chasing Michael Ledeen’s grandkids around the seedlings and making scary Islamofacist noises until one day he collapses on the ground and the kids gather around and laugh at the silly old man with the harmless orange-peel teeth.