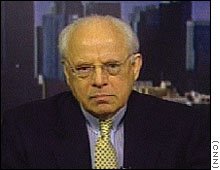 Crooks & Liars is taking a nap and then going to a party with Mark Kleiman but tomorrow they will have the video up of John Dean on Countdown tonight with Keith Olbermann. The transcript is not available yet but Dean basically reiterated what David Gergen said earlier today, that Fitzgerald’s tactics are probably meant to squeeze Scooter. He referred to Scooter as the firewall to Cheney, and said that the indictments brought down today were quite probably intended to test the resilience of that firewall.

We’ve known since Judith Miller’s testimony that Fitzgerald has been inquiring about Cheney. At the very least today’s indictments, if brought to trial, will give Fitzgerald the opportunity to question Cheney on the witness stand as he testifies against his former Chief of Staff. And at worst? Well, the threat of thirty years might make a guy like Scooter rat Big Dick out sooner rather than later.

Then again, maybe loads of character will cause Scooter to do the honorable thing and take the thirty years.

Update: Swopa, on the WaPo comment that Rove said something which “gave Fitzgerald pause” at the last minute:

But what about Rove? It’s weird enough to consider what Karl could possibly have offered that kept Fitzgerald from deciding whether to prosecute him — although it’s easy to imagine Rove and his lawyers devoting every waking moment the past few weeks trying to invent something. (Aside from the probably vain hope that Fitzgerald would accept a bad deal out of a desire to wrap up his investigation by the time his grand jury expired, there’s the simple incentive of staying out of the headlines as the first Bushite official indicted … even if he gets nailed next week, the font size won’t be quite so large.)

But maybe there’s a connection between the two postponed sets of decisions. Did Rove tease Fitzgerald with the possibility of turning on the president or vice president? If so, is there a chance in hell that he meant it?

Now that would be positively Rovian.

Update 2: Eriposte sends us this link. Anything sound familiar?

Update 3: There is a video of John Dean on Countdown here. Thanks to netro in the comments for the link. The one of Lawrence O’Donnell is excellent, too.

There was nothing to keep Fitzgerald from saying, had it been true, something like: “The investigative phase of this case is now over. The grand jury has indicted the only person we thought, on the evidence we now have, had provably committed a crime worthy of prosecution. Of course it’s possible that, in the course of the trial, new information might emerge that would implicate other people, and if that happened those people might be indicted. But as of now, we’re not investigating anything or anyone else, and my previous request that witnesses and lawyers not discuss the case with one another or with the press is therefore no longer in effect.”

Mark Kleiman is a very smart man. Have I said that today? Hope he and Amato (C&L) are having a bang-up time at the Wes Clark bash.

Update 5: Sweet leapin’ Jesus — me, Kevin Drum and Andrew Sullivan all agree on something, namely that Fitzgerald may be contemplating prosecuting the leak itself. No, I’m not kidding, read the Sully link, you won’t be sorry.