The Man With the Plan 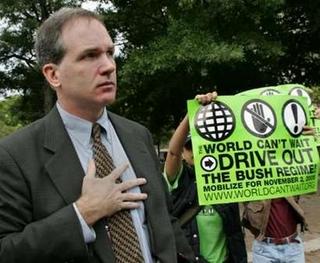 When I was an 18 years old, I worked as a lackey at the San Francisco Bay Guardian. I had to do the stuff nobody else wanted to do — consigned to writing about the Half Moon Bay pumpkin festival or spending the afternoon at City Hall looking through microfiche and counting the number of radio waves in the air because some wack job had wandered in off the street and convinced Editor-in-Chief Bruce B. Bruggman (or “B3” as we knew him) that they were giving everyone brain cancer, More often than not, my efforts turned up fruitless, to which B3 would always respond: “there is no story — that’s a story!”

Proving once again to my eternal vindication that this is not always true, Salon Magazine runs a filler piece on Fitzgerald today:

It can also be recorded in these pages that rumors had already been making the rounds through the courthouse for nearly an hour about the substance of the first “off-the-record” utterance, a major event by the man who holds the nation’s political future in his briefcase. Apparently, he had said, “I’m leaving,” according to several secondhand accounts. In other words, Fitzgerald appears to have told reporters, “off-the-record,” that his session behind closed doors with the grand jury was done for the day. There would not be, at least immediately, a press conference at the courthouse steps. No frog marching of I. Lewis “Scooter” Libby or Karl Rove. No relief to the weeks of building speculation over the fate of the Bush White House.

For the nearly two dozen print reporters and television producers who had spent the day scrambling through the corridors of the courthouse like fevered rats sniffing for cheese, this was a bit of a letdown. The pack had proved itself particularly inept Wednesday, always standing on the wrong side of the grand jury door or in the hallways, rustling papers and thumbing BlackBerrys, as confused as everyone else. Reporters nodded and smiled in unison at members of the grand jury as they filed in and out of the elevator, cradling coffee or walking on canes, wearing winter coats or shouldering large purses. But that was it. Hardly a word was exchanged. To pass the time, reporters traded theories about what was going on. One cable news producer cradled a walkie-talkie and could be heard at one point saying to an associate at another position in or around the courthouse, “Red dog, this is Grey Fox.” Another reporter, betraying some frustration, mused about her own profession, “We sound like such losers, and that’s because we are.”

The morning had certainly started on a somewhat more optimistic note. Fitzgerald, upon entering the courthouse, had stayed firmly “on-the-record.”

“Today the day?” one reporter asked him after he had passed through the metal detector. “I’ve got no comment, sorry,” he said, striking a sympathetic tone.

Another reporter tried a less direct tack. Referring to the swarm of cameramen outside the courtroom who had all but assaulted him with their lenses when he arrived at the courthouse, she said, “They are getting some good shots of you.”

Fitzgerald, who knows the whole world is waiting for him to speak, took the bait. “Oh,” he said, in an admirably self-deprecating tone. “There is no good shot of me.”

Well, they got one thing right — the future of the nation is riding on the shoulders of the big man in the rumpled suit. All in all, I have to say that compared to the deeply furrowed brows and haggard grimaces worn by those he is pursuing, he seems to be holding up remarkably well.

Which goes to show that nothing does wonders for the complexion like a clean conscience. Maybe there is a story after all.

The Man With the Plan