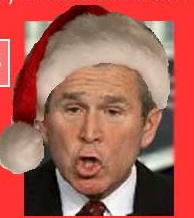 It looks like Cheney is bloodied if not out of the game entirely. Junior sits on the sidelines like a dispirited waterboy watching one fallen warrior after another carried off the field. But are we really to believe that he is nothing more than a thick-witted victim of his compatriots’ malfeasance? What are the odds?

Pretty fucking low, if you ask me.

This week saw the nick-of-time release of the New Yorker article where Poppy’s best friend, Brent Scowcroft, rushes in to save Junior by hanging all his cronies out to dry. “Poor Dubya, he just doesn’t know how to pick his friends.” But Scowcroft is a player in a much larger and much more telling drama with regard to Junior that is only hinted at in the New Yorker piece.

The underlying narrative… is the subconscious rivalry between the father and the son, Scowcroft becoming the stand-in for 43’s resentment toward 41. You wonder how many of the tragic blunders of the last five years are the result of crafty neocons playing into Junior’s desire to gainsay his father.

Although the Bush family junta will pull together when it’s time to collect their checks from the Carslyle group and preserve family hegemony, I think Digby is right in observing that there is a keen competition going on between the ne’er-do-well son and his patriarchal father that is positively Shakespearean.

Which has everything to do with why I’ll never be convinced that Junior was not in on the attempt to smear Joe Wilson from the get-go, despite the desperate efforts of GOP playmakers to keep the focus away from him even as they offer up the head of the much-hated Cheney on a plate.

But let’s dial it back a bit.

Bush’s rush to war was a clear indictment of everything his father stood for. Where Bush 41’s war with Iraq was a carefully measured campaign that sought to build alliances, share internationally the responsibility and expense and carefully court the world of public opinion, Bush 43’s war resembled a pack of drunken cowboys riding into town and recklessly shooting up the saloon.

Junior’s war was a mockery of his father’s efforts, and he didn’t want to waste time on things like National Intelligence Estimates, an analysis of all the pre-war intelligence regarding Iraq which might have caught many of the specious claims that were waved through by partisan yahoos playing spy. Dick Durbin had to make a special request for an NIE to even be done prior to a declaration of war (p. 12 of the SSCI). National Intelligence Officers say that “ideally they would like about three months to produce an NIE;” this one was produced in less than twenty days, and its findings were never sent out for peer review or to a panel of outside experts because BushCo. said there wasn’t time. (p. 13, SSCI)

I remember when Bubba Clinton and Bush Sr. were doing their tsunami tour and good son Bubba slept on the floor so Poppy could have the bed. Ouch. That had to rankle Junior. Then Poppy invited Bubba up to Kennebunkport (site of Junior’s DUI). When I read that, my back went straight up. There is no way that a loadie like Junior didn’t take that as an implicit criticism of everything he was and everything he’d done.

So when Joe Wilson appeared on the BushCo. radar as an administration critic, I’ll believe Bush didn’t register it when I’ll believe Cheney came clean during his first tete-a-tete with Fitzgerald.

Wingnutia may want to impugn Wilson shamelessly, but Poppy called him a “true American hero” and raised him to the rank of Ambassador for the skillful way he handled himself in the midst of a very delicate and dangerous situation during the first Iraq war.

Scowcroft and Wilson were chummy. They both sat on the American Turkish Council. As Wilson said in his book:

We fell into an easy relationship and would banter back and forth about the new administration and its predecessors. After board meetings or other events, we’d often Metro back across town together. As the obsession with Iraq overtook many influential members of the Bush administration, our conversations turned frequently to the emerging debate on Iraq and the merits of the approach being advanced by the prowar crowd.

Hallo! Wilson would pal around with Poppy’s best friend and trash Junior. Then Scowcroft publicly called Junior out:

Brent Scowcroft was becoming increasingly concerned that perhaps his earlier optimism had been misplaced. No longer certain that the administration would shun the neoconservative path, he wrote a piece that appeared in the Wall Street Journal. on August 15, 2002. He warned of potential disaster if we tried to deal with Saddam militarily.

Before Wilson published his October 13, 2002 article for the San Jose Mercury News in which he was openly critical of BushCo.’s ramp up to war, he sent it to Scowcroft and Baker for review, as well as Poppy. Catch this:

Brent called me when he received the article. He kindly asked if he could “take it over to the White House,” only about two blocks from his downtown office. He said that he thought senior officials ought to read the views of somebody who actually had experience in Iraq and with Saddam’s government. (p. 296, my emphasis)

So Poppys best friend Scowcroft (who’s already on record for publicly calling Junior a fuckup) carries Wilson’s article down to the White House and swats Junior over the head with it like a dog that had peed on the rug. Acting as a stand-in for his war veteran dad, holding Wilson up as a model of patriotism and bravery while laughing at Nintendo boy for launching a foolish war from the comfort of his Barcalounger.

Jesus tapdancing Christ. You think THAT didn’t raise every hair on the back of Junior’s neck?

The day after Joe Wilson’s July 6, 2003 op-ed piece in the NYT was published, Bush and his entourage were on their way to what they hoped would be a historic tour of Africa. Bush was hoping to trump Bubba by arranging for a longer and more extensive trip than any American president had thus far undertaken.

Yet from the moment the plane took off, all Ari Fleischer seemed to want to talk about was Joe Wilson. I mentioned it yesterday, but I’ll quote it here again, from Wilson’s book:

Within a day, Fleischer was putting a different spin on the situation and downplaying the importance of my report. At one briefing after another, he had something to say about me, and by doing so gave the journalists another news cycle to talk about the sixteen words rather than about the president’s trip. Instead of containing the burgeoning press frenzy, Fleischer kept giving the story legs, so much so that it soon overwhelmed the president’s agenda in Africa.

If Bush wasn’t in on the “smear Wilson” campaign and didn’t care about it, I have to believe he would’ve told Ari to put a sock in it and focus instead on all the great photo ops this current trip was affording him. It was his big chance to con Tony Blair into believing he actually gave a shit about Africa, and pretend his medieval policies on contraception weren’t responsible for wiping out large swaths of the population.

Why would he allow Joe Wilson to have the limelight and shit all over his big PR campaign? ‘Cos Wilson was Poppy’s guy, that’s why, Bush is his mama’s boy — as Arianna noted, he’s a guy born on third base who thinks he’s hit a triple. He can’t talk back to Poppy. Hell, he can’t even talk back to Scowcroft. But he sure could grind Joe Wilson into the ground with a faux-cowboy boot heel.

They’ve tried to argue that this was all Cheney’s doing, but I don’t buy it. This wasn’t the kind of thing Rove needed to “protect” Junior from. It’s the kind of dirty, junior high politics that Junior delights in.

May it come back to haunt him.