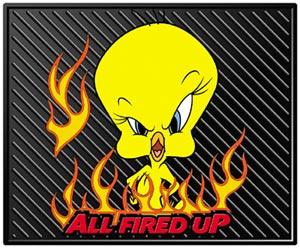 It was another doozy of a Hardball this evening. It may be a ratings bonanza driven spate of real reporting, but it was an interesting show nonetheless with a few nifty bits. Matthews was actually mostly well-informed this evening — I think David Schuster has been doing his crib notes for show interviews.

The show started with a comparison between the “two wars,” as Tweety put it: the war in Iraq and the war against Joe Wilson, and how the two were “entangled.” According to Matthews, today both seem to be going badly for the WH.

David Shuster did another good summary, saying straight out that both Rove and Libby — and others — have now been advised that they are in legal jeopardy. I think by that statement that some notification letters or phone calls went out today to some attorneys around town. He sourced this to the NY Times as originally reporting on it, but was confident in the information, which leads me to believe he may have a few sources confirming this on his own. It was a straight out statement, no mincing words.

They had an attorney on whose name I missed, but who said something to the effect of “I can think of no good reason to out a covert agent of your own country,” in talking about the latest WH and GOP spin attempts on potential charges. Shuster followed-up with a smack down of Kay Bailey Hypocrite, using her own words. It was lovely.

Shuster said the SGJ met last Friday with attorneys from Fitz’ office who carried in large briefcases full of documents. Sources close to the case believe that may have been the beginning of a summation for indictments for the jury members.

DeFrank re-iterated that the President’s mood is not good at all. He said that that President has indicated concerns that the VP may have pushed the intelligence too far on Iraq. Was being very careful on wording to protect his sources from the WH, as well — guess they haven’t learned that payback lesson very well. Mitchell saying this is the first sign of daylight between Prez and VP who have been “so close” (her words) through this administration.

Mitchell said that the WH and attorneys for potential defendants trying to spin or minimize things in advance of any bad news. And that the “blame game” that the WH has complained about has now moved inside the WH with some of the stories on Libby and Rove and others and the fingerpointing going on in the press.

David Gregory reported from the WH that the mood is extremely tense and nervous, despite the outward attempt at a facade or patina that says otherwise. Gregory (who has been great on this story for months) says that you cannot overstate the importance of Rove to this WH in terms of what it would mean if he has to resign. He also said that staffers in the WH are saying that the Preznit has outbursts of temper all the time, trying to downplay the DeFrank article from today. (Lousy spin if you ask me.)

Mike Isikoff of Newsweek was also on and mapped out a basic timeline on the Cheney/Wilson feuding. Not a lot new, but a good repeat for people just tuning in to the story.

Gregory then said that the WH got into “campaign mode” in dealing with Wilson questioning them. That there was no question that the effort was an aggresive attempt to beat Wilson back.

Matt Cooper’s attorney, Dick Sauber, was on as well and lined out some of the potential steps toward and after indictments. He said that he feels that this is an extremely serious matter, and that the public has barely scratched the surface in terms of what Fitz has been looking at along with the media. Every judge looking at the sealed information in this matter, across the political spectrum, has has been impressed by the “serious and significant” evidence.

Sauber also indicated that, if indictments are not forthcoming, Fitz may wish to issue a summary report. To do that, according to Sauber, he would need to get approval from the presiding judges, since it would involve a matter of grand jury secrecy being exposed, but that a report was certainly possible if need be.

Sauber says that trials in these cases, if indictments are forthcoming in this matter, would occur no earlier than late winter, early spring, due to the court docket in DC and preparation issues for attorneys representing defendants.

Then came Tucker Carlson, Ron Reagan, and Tony Blankley. Tucker was his usual uninformed, glib, and moronic self. Ron Reagan and Tony Blankley both agreed that trying to minimize perjury was a stupid strategy for spin. And Reagan got off the best line of the night, saying that “If you say perjury now is no big deal, then you have to say that the impeachment of Bill Clinton was a farce. And I don’t think those people are going to be willing to say that.”

I missed the bit in the middle with the New Yorker writer on the Scowcroft article (sorry — naptime ended and I had to run and be a mommy for a few minutes). All in all, definitely worth a watch today in one of its many showings.

Will update this a bit when they get the transcript up.