Life Sucks in the Pressure Cooker 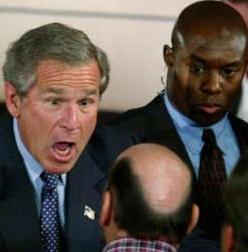 Looks like all those stories about the Preznit losing his cool may have a little more substance than just rumor and innuendo. The NY Daily News has a story today that quotes friends of the Preznit saying he’s been a bit…erm…angry, bitter and loud with the staffers.

Well, and why not? The Iraq War is going badly, with the 2000th military death approaching and lot of questions being raised about just how incompetently this war is being run, especially about the lack of any real plan for post-invasion strategy. The whole Hurricane Katrina/Brownie thing was a horrible embarrassment, not to mention the fact that he was vacationing for days while people were drowning in their homes. Harriet Miers…um, not going so well. And his brain may be facing indictment. Erm….Brain, meant to capitalize that.

Bush usually reserves his celebrated temper for senior aides because he knows they can take it. Lately, however, some junior staffers have also faced the boss’ wrath.

“This is not some manager at McDonald’s chewing out the help,” said a source with close ties to the White House when told about these outbursts. “This is the President of the United States, and it’s not a pleasant sight.”

Presidential advisers and friends say Bush is a mass of contradictions: cheerful and serene, peevish and melancholy, occasionally lapsing into what he once derided as the “blame game.” They describe him as beset but unbowed, convinced that history will vindicate the major decisions of his presidency even if they damage him and his party in the 2006 and 2008 elections.

At the same time, these sources say Bush, who has a long history of keeping staffers in their place, has lashed out at aides as his political woes have mounted.

What’s that you say? Cheney is getting his share? Do tell.

The vice president remains Bush’s most trusted political confidant. Even so, the Daily News has learned Bush has told associates Cheney was overly involved in intelligence issues in the runup to the Iraq war that have been seized on by Bush critics.

Hmmmm…the President must really be examining his own decisions to be certain he doesn’t make the same errors in the future, right?

Bush is so dismayed that “the only person escaping blame is the President himself,” said a sympathetic official, who delicately termed such self-exoneration “illogical.”

Well, maybe not so much.

Thomas deFrank has some close ties to James Baker, the former advisor to the former President Bush, so I have to wonder who he has gotten to talk for this article? Is Poppy giving permission for his pals to take Junior to the woodshed?

Guess this is one explanation for all the weird jaw clenching lately. Sucks to be in a pressure cooker of your own making.

UPDATE: Still having Haloscan issues. Sorry it is causing comments problems, but we’re working on it.

UPDATE #2: Preznit is set to announce a replacement for Fed. Chairman Alan Greenspan at 1 pm today. Someone check and see where the Preznit’s personal accountant is. After the Miers nomination, I’m not leaving any stone unturned. Sorta makes you wonder what else might be going on at 1pm today, doesn’t it?

UPDATE #3: The NYTimes is reporting that it will be Ben Bernancke, his top economic advisor. Sure looks like it’s a good time to have an office just down the hall from the Preznit, doesn’t it? Doesn’t exactly leave the building to find his nominees these days…

Life Sucks in the Pressure Cooker