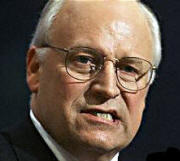 A lot of people are saying that the NYT article does not indicate that Dick Cheney committed a crime, it simply says he was aware of the Valerie Plame/Joe Wilson situation. I beg to differ.

Here is the key paragraph:

Cheney was interviewed by Fitzgerald last year under oath. That would make it perjury to tell a lie. Although Republican logic tells us that perjury is only a crime if you’re getting a blow job in the bargain, a legitimate US attorney might not see it that way.

What indication do we have that Cheney lied? Well, if Cheney he had told the truth when he was interviewed last year, i.e., that he was Scooter Libby’s source, Fitzgerald would not have needed to threaten Judy Miller and Matt Cooper with jail in order to counter Scooter Libby’s testimony that he first heard about Valerie Plame’s identity from journalists.

Also from the Times article:

It also explains why Mr. Fitzgerald waged a long legal battle to obtain the testimony of reporters who were known to have talked with Mr. Libby.

The reporters involved have said that they did not supply Mr. Libby with details about Mr. Wilson and his wife.

In other words: the testimonies of Cooper and Miller were necessary to bust Libby in a lie.

The decision of Judges Tatel, Henderson and Sentelle against Judy Miller was decided on February 15, 2005 and reissued April 4, 2005. Without getting into elaborate quotes, basically they agreed that there was no other way to get the information they needed other than from these journalists. They did not resort to jailing Miller or Cooper lightly without first having exhausted all other possibilities.

Which means Fitzgerald was not sitting on some big cathartic confession from Dick Cheney at the time.

Cheney lied. Under oath. Put any Republican (and a few DINOs) in the wayback machine, and they will tell you — this is an impeachable offense.

Update: Everyone seems to be concerned that the Times may have gotten the “under oath” thing wrong. My inclination is to believe the Times is being VERY CAREFUL about this shit at this point in the game, but I promise to check it out tomorrow and report back. Regardless of whether Cheney was under oath or not, lying to Fitzgerald would still be a crime.

Update 2: Swopa, from the comments: “If Cheney goes down with Scooter and Karl, I’m not sure how Dubya survives — it would be tantamount to admitting he’s just an empty suit they send out to read the teleprompter while other folks run the country. Granted, they’d need the jaws of life to pry him out of the Oval Office, but Republicans in Congress might realize that he’s going to drag them down with him.”

CORRECTION: According to the Times this morning, Cheney was not under oath at the time he was interviewed by Fitzgerald.