The Veep Orders His Tomb 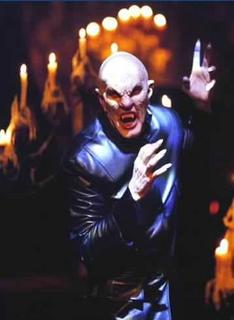 It looks to be a bumpy week for Darth Cheney. First, as Atrios noted, David Gergen — who only days ago on Hardball was ready to defend his good friend Dick Cheney with his dying breath — totally shanked him. Now if Newsweek is any indication, Scooter and the Veep will be the main course as the MSM prepare to dine at Patrick Fitzgerald’s all-you-can-eat-indictment-buffet:

Cheney had long distrusted the apparatchiks who sat in offices at the CIA, FBI and Pentagon. He regarded them as dim, timid timeservers who would always choose inaction over action…

…and deny him his feast of virgin’s blood, for which he did battle with Darth Novak. (…sorry…)

An intense former litigator, [Libby] acted as a conduit for Cheney’s obsessions. Soon after 9/11, Libby began routinely calling intelligence officials, high and low, to pump them for any scraps of information on Iraq. He would read obscure, unvetted intelligence reports and grill analysts about them, but always in a courtly manner. The intel officials were often more than a little surprised. It was unusual for the vice president’s office to step so far outside of channels and make personal appeals to mere analysts. “He was deep into the raw intel,” says one government official who didn’t want to be named for fear of retribution….

Behind their backs, their detractors dubbed Cheney and his minions “the commissars.” The vice president and Libby made three or four trips to CIA headquarters, where they questioned analysts about their findings.

You get the image of these professional intelligence people rolling their eyes and wishing these jokers would go play spy someplace else, maybe write some Thunderball fan fic and just leave them alone.

Behind the scenes, no one pushed the terror link harder than Libby. He urged Colin Powell’s staff to include the [Mohammed Atta/Iraq] Prague meeting in the secretary of State’s speech to the United Nations. But Powell wanted no part of it. After one long session debating the evidence before the speech, Libby turned to a Powell aide. “Don’t worry about any of this,” he said, according to someone who was in the room. “We’ll get back in what you take out.” They didn’t. Powell refused to use the line, but Libby’s audacity stunned everyone at the table.

“Someone who was in the room.” Wonder who that could be? (*cough* Colin Powell *cough*).

Cheney’s office declined to comment on specific questions for this story, beyond saying that the vice president and his staff are cooperating with Fitzgerald’s probe…

If “cooperating with Fitzgerald’s probe” means waving a dead chicken above one’s head while screaming some weird Santeria death hex, then I guess so.

The Veep Orders His Tomb