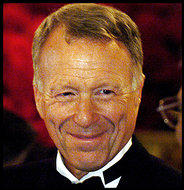 The contours of the Scooter Defense begin to take shape in the MSM. How do they find time in between carrying Rove’s water? Remarkable.

But friends and associates said Mr. Libby is not at heart a political animal. They suggest that whatever legal problems he faces from his role in pushing back at criticism by a former ambassador, Joseph C. Wilson IV, of the administration’s use of pre-war intelligence about Iraq’s weapons programs, he was acting not as a political hatchet man but in defense of ideas and policies he believed in.

Then there’s the WaPo article so glowing Scooter could’ve written it himself. On his “aspen clusters:”

The spy-novel dexterity of Libby’s mind and the odd flamboyance of his prose raised questions that he might have been trying to say something more.

We on earth call it “dreck.”

Libby greatly admires the work of Victor Davis Hanson, a classicist and military historian who posits that warfare is an inevitable part of civilization, evil is a basic condition of humanity, and tyrants must be confronted by the harshest possible means.

I guess that’s supposed to make him sound like a real renaissance man. Bloggers who know Victor Davis Priapus Gravitas Hanson, the bard of Fresno, as an inveterate boner waver and all-around jackbooting creep know this fact alone should earn Scooter three squares in the federal pen for the foreseeable future.

“Cheney and Scooter play chess on several different levels,” Matalin says. “That’s how their minds work. It’s not about what’s right in front of him. They look at things in the sweep of history.

“The Wilson thing was almost mosquitoesque.”

I’m getting it. These men are great patriots, brilliant statesmen with a dash of Malraux thrown in for good measure, acting on such a grand stage that L’affair Plame hardly registered.

Let’s be clear: I don’t really care why you shot the clerk and robbed the liquor store. You can tell your story to the judge.