Oh Russert, Where Art Thou? 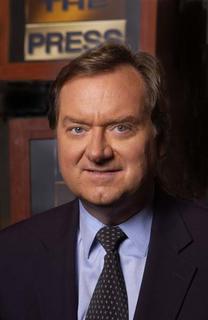 At some point, the desire to report the news and the desire to be the person that gets to report the news battled it out — and the big contract, cocktail party access and TV face time won out. With so many reporters becoming the news themselves, and sitting on information that they have all heard around town because it might strain their background sourcing and their inside connections to the halls of power, one wonders whether a majority of the press corps is suffering from some sort of battered press syndrome.

Are they fearing the next set of blows to their access could doom their cozy face-time contracts with the networks and sink their careers before the wrinkles take hold? That the backlash from actually doing their jobs properly could mean losing their means to do their jobs? I will say this, Rove has done a good number on a lot of these folks — just look at who is holding something back.

Tim Russert from Meet the Press: What sorts of conversations did he have with Libby and/or Rove and anyone else? Has anyone at the NBC news division asked him to account for that? Oh, that’s right, Russert is the Washington news bureau chief — what are the odds he’s been asking himself to do a proper public accounting on this? What sort of accounting has he given to Patrick Fitzgerald? Why hasn’t Timmy been asked abotu any of this on the air — can’t Katie Couric jab him with her Manolo’s and get him to at least answer something on this one morning before his coffee has kicked in?

And now that Scooter Libby has fingered Russert as his source in this AP article, you really have to wonder how much longer Russert will be keeping his mouth closed on what he knows, consdering he works for a news division that, presumably, isn’t as dysfunctional as the NY Times has been. Or is it.

Bob Novak: This is the ultimate question mark, isn’t it? How much cooperation has he truly given to Fitzgerald? One assumes quite a bit, considering his ass never got parked in jail, but really, wouldn’t we all like to know just what it is that Bob was doing writing an article outing a CIA agent’s name after the CIA told him directly not to do so?

Andrea Mitchell: Again, with the NBC news division. Seems Mrs. Greenspan was sitting right next to Dick Cheney and got some juicy tidbits for dinner above and beyond the rubber chicken meal served. But she saved them up for months, only letting them out in dribs and drabs now after the election. “Um, hello. Conflict of interest and Hypocrites anonymous hotline? I’d like to stage an intervention…” Just once, I’d like to see someone ask her straight out about this — my vote is for David Gregory or David Schuster.

Chris Matthews: Are you seeing a network pattern here, NBC? Why were you the go to leak network? What other things were discussed between Matthews and Rove other than the fact that “Wilson’s wife was fair game?” And just when did this conversation occur? Was Matthews calling Wilson to warn him of this Rove statement, or to get some sort of confirmation from him on his wife’s occupational choices? Enquiring minds and all that.

Walter Pincus and Glenn Kessler: Buried in the most recent WaPo article, was a bit that piqued my interest. Was it just sloppy writing, or a more accurate attribution when they said this:

Who was the White House official who leaked word about Wilson’s wife to The Washington Post’s Walter Pincus, who has never publicly revealed his source?

Previous reports from Pincus read “Administration source” if I’m not mistaken. A more specific White House sourcing tends to narrow down the list ever so slightly. How did this contact occur? Who initiated it? For what purpose?

There are a lot of others involved in this as well, these aren’t the only reporters holding stuff back, but a serious discussion needs to be had on this issue. And not just in the insular journalists talking to other journalists and patting each other on the back and covering each others’ asses sort of way.

Those of us in the general public depend on reporters to dig into the dirt for us, to bring out the filthy little lies and secrets that can rot the government from its core to the outside. We expect that the doing of the job will be more important that the keeping of the job — and the maintaining of the powerful friendships and whatever other incentives this may bring along with it.

Instead, in this Traitorgate mess, and in the run up to the Iraq War, what we got was a lot of superficial factual reporting, sourced to layered secret sourcing that turns out, now, to have been the same group of 8 or 9 people confirming each others’ stories. That’s just plain lazy. And dangerous — just ask all those soldiers who have lost limbs or the families of those who have lost their lives how important it might have been to know the actual truth from all sides of the issue, instead of just reporting the easy bits that were spoon-fed to you from WHIG, that clearly had its own agenda ahead of everything else.

One of the good things that can come of this Fitzgerald investigation is a closer look at the incestuous relationship that journalists and the politicians they cover have built up in Washington, D.C. Just as we lament the interrelationship of K Street and big money and politics, we shouldn’t forget that most media conglomerates are also attached to big money these days. Is there overlap? Are there foxes in the henhouse?

Oh Russert, where art thou?

For some great reading on the Russert issue further, take a peek at Susan Hu’s take at Booman Tribune.

UPDATE: I want to add a personal caveat in here. I think that the reporting done by Pincus and Kessler in the WaPo has been quite good in a lot of cases, and that needs to be addressed. Kudos to both of them for having some cajones to actually do some digging when so many others (*cough* Judy *cough*) sat back and allowed themselves to be unquestioning conduits of dreck. Asking the tough questions doesn’t get you invited to the cool kids parties, but it sure as hell earns you the gratitude of the rest of the country who has to live with their decisions.

There are certainly other reporters who do the tough work every day. But with the closing of the Nightline shop, and the continued trend toward wacky tabloid shows and talking head roundtable showcase extraordinaires, I despair sometimes that the public’s needs are getting pushed further and further to the bottom of the pile by everyone. We really need to have some public discussion on this issue and soon.

UPDATE #2: And here’s a great example of what is right in journalism these days. I love Dan Froomkin’s White House Briefing column in the WaPo. And the stories to which he links today are excellent in their coverage, especially of the Wilkerson criticisms that I touched on briefly in last night’s round-up. The video link is a must see.

UPDATE #3: Digby’s latest hits this issue out of the park. Great analysis. (Hat tip to reader jdw for the heads up on this. Thanks!)

Oh Russert, Where Art Thou?