Words to die by… 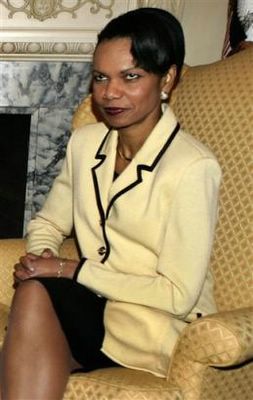 Trust me. Have I ever been wrong before?
I mean besides the war and the aluminum tubes and the WMD and the mushroom clouds and that Bin Laden memo…

Condoleeza Rice is the woman who was once described as someone whose area of expertise involves a country that doesn’t exist anymore, so your response to this should either be a dramatic rolling of the eyes or a solidification of the belief that these people are not of this reality:

â€œAre we committed to holding Iraq together in perpetuity, even if the parties involved, the Iraqi people, determine they donâ€™t want to form the sort of visionary Iraqi nation that you and the president envision?â€ Obama asked Rice.

She insisted that the senators were overplaying the importance of sectarian divides among Sunni, Shia, and Kurds in Iraq.

Two years and another 1000 American military deaths from now she will be telling a reporter, “No one could have anticipated that thousands of years of ethnic, tribal, and religious hatred would trump our neo-con wetdream.”