Not a Good Week for BushCo 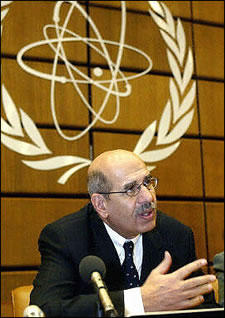 Mohamed ElBaradei, head of the UN watchdog agency, the International Atomic Energy Agency (IAEA), and the organization itself have won the 2005 Nobel Peace Prize. Some of you may remember ElBaradei from the wonderful BushCo press conferences prior to the Iraq War where the Preznit and his cronies all but called the IAEA incompetent. Look who is being called incompetent now!

Just wanted to take a minute away from the Traitorgate story to congratulate Mr. ElBaradei and his hard-working and dedicated staff for winning this prestigious award. They do the tough work in the field — in Iran, in North Korea, in Pakistan, you know, in the countries that actually have existing nuclear programs. This is especially sweet, because you just know it is adding to the heap that is piling on the White House this week and sticking in Cheney’s craw.

Poor Bushie. If he had only listened to ElBaradei back in 2002 about Iraq having no working nuclear program, instead of Cheney’s band of merry neocons who said we would find nukes and WMDs everywhere (um…good call, that…not), we might not be so bogged down in Iraq. It’s worth a reminder about all of this, given the fact that Amb. Joseph Wilson was trying to speak some of these very truths when Rove and Company hatched the little plan to get even. You know, the plan that now has them in so much hot water. “Oh, what a tangled web we weave, when first we practice to deceive.” (Hat tip to Sir Walter Scott on that one.) Go get ’em, Fitz — the whole, stinking lot of them.

Not a Good Week for BushCo