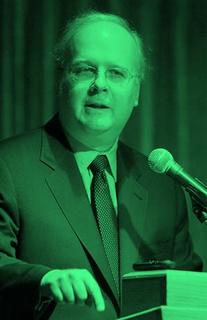 He’s baaaaaack. That’s right, Uncle Karl has been given an opportunity to testify for a fourth time before the Special Grand Jury tomorrow, according to an AP wire report. No time has been given for expected testimony, but expect lots of lovely, harried shots of Karl and his attorney pals as they scramble in and out of the building.

According to the AP, the offer of testimony came from Rove, and was accepted by Fitz and Co., who have warned Bush’s Brain that there is no guarantee that his testimony will not be used against him in an indictment. Well, duh. Unless Fitz were going to grant Rove use immunity for his testimony (which WOULD be news), of course they are making no guarantees.

The AP source(s) go on to say that no decisions have been made to indict anyone in the Traitorgate matter, either Rove or others involved.

Then the article goes off the reservation in terms of factual information and wades deep into source spin land. Look, I understand everyone is working on a deadline on these stories but, for heaven’s sakes, call an attorney not involved in the matter and fact check the information you are given before you print it, would ya?

The article states that testimony of a potential indictee this late in the game with a grand jury is unusual, which is correct unless you have newly discovered evidence or information, or you have a defendant who has been presented with a target letter or other pending indictment notification who is now scrambling to save his own ass by talking his way out of the box.

The article then goes on to say that US Attorneys do not call witnesses who face possible criminal charges without first warning them that this is a possibility and that “[t]he prosecutor did not give Rove similar warnings before his earlier grand jury appearances.” Well, that’s just wrong. I mean, flat wrong.

Anyone who has spent any time reading the rambling musings of Luskin over the last few months knows that Rove was a “subject” earlier in the investigation. Luskin has said as much earlier in the summer — in Newsweek, the WaPo, the LA Times, back in July, Luskin couldn’t shut his mouth about a lot of “facts” in this case. He was the master of client spin. Suddenly, he has no comment? Wire reports from last night floated everywhere (hat tip to Reuters for some excellent work) and Luskin was on record as “no comment.” A “subject” is given notification that he is strongly being considered for charges because his rights are attached along with a subejct notification letter to the top of the subpoena for testimony. That notification would be attached to each and every subpoena once Rove reached the “subject” status, so he knew that he had the right to remain silent.

What does all this say to me? It says someone got himself a target letter. Let’s hope the Boy Wonder has a good excuse or two up his sleeve, because it sure looks like Judy may have added a nail to Karl’s coffin last week. More as the story develops.

UPDATE: Looks like Luskin finally called Solomon back and gave a quote. There is an updated version of the AP story in the Washington Post. Luskin says “categorically” that Rove has not yet received a target letter, and also tells Solomon that Rove offered to testify again at the end of July, but that Fitz held him off until after the Miller testimony last week. Luskin also says that Fitz sent information to his office making clear that any testimony given by Rove may be used against him in a prosecution and that there are no guarantees that an indictment will not be forthcoming. Luskin used the conversation to get the information out that, according to him, Rove had not yet been formally targeted, and that any further communications between his office and Fitzgerald would be confidential.

Two things of interest in this revised version: (1) It repeats that Rove was not given notification of potential criminal jeopardy prior to his previous testimonial appearances. That does not square with other statements made by Luskin and anonymous sources close to Rove, etc., stating that he was earlier given “subject” notification. This is odd — when were we hearing the truth on this? In early July? Or now?

(2) Rove contacted Fitzgerald about giving further testimony in July, presumably around the time all the leaks were flying from Luskin and others after everyone learned that Rove was Cooper’s source. Fitz chose to wait until after Judy Miller testified before taking them up on the offer. Why? What did Fitz need from Judy — that he presumably got — that then made Rove’s testimony useful in some way? Other than portraying Rove as being cooperative, what good does it do Luskin’s client for all of us to know that Fitz found some presumed discrepency between Rove and Miller’s testimonies?

Guess we’ll all find out if we ever get to read indictment text. Until then, it will be the Karl show tomorrow.

UPDATE #2: New version of the AP article now has some great analysis from Stephen Gillers of NYU Law School. He calls this fourth trip to the jury and Fitz’s required warning of rights as “an ominous sign” for Rove, and also says how unusual this is in terms of usual procedure. My favorite quote:

“It suggests Fitzgerald has learned new information that is tightening the noose,” Gillers said. “It shows Fitzgerald now, perhaps after Miller’s testimony, suspects Rove may be in some way implicated in the revelation of Plame’s identity or that Fitzgerald is investigating various people for obstruction of justice, false statements or perjury. That is the menu of risk for Rove.”

Anything on that menu sounds good to me. I’ll take one of each. No, make that two.

UPDATE #3: Murray Waas has his take on things up here. VERY interesting stuff. Locks in some details as to what Rove’s testimony might cover, including the discrepencies that emptywheel has speculated about between other testimony and Rove’s, and why Rove’s testimony has been evolving over time. Never good to have an ever-changing story.

Waas also reports that Rove is likely to be asked about the nexus of contacts he had during the critical weeks between the INR memo and Novak’s column. This is some really good stuff.

“He will also be questioned regarding contacts with other senior administration officials, such as then-deputy National Security advisor Stephen J. Hadley and I. Lewis Libby, the chief of staff to Vice President Dick Cheney in the critical week before the publication of columnist Robert Novak’s column on July 14, 2003…”

Excellent work from Waas, as always, and a great read. Should be interesting tomorrow to see if any more leaks start springing. (One note here, if Waas’ source is someone in Fitz’ office, himself will be very displeased. No prosecutor likes their cat being let out of the bag too early. I think Mr. Rove has many more surprises in store for him tomorrow.)