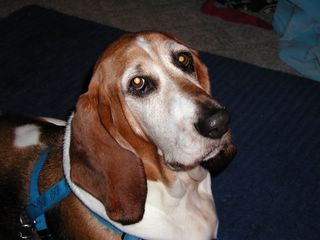 I just got back from the Padres/Dodgers game (Padres win 6-1. Yay) to find that Beckham has eaten my glasses. That would be the second pair in the past three months leaving me now with one pair. Because of that, he doesn’t deserve to be in Thursday night basset blogging.

For those keeping score at home, that’s: two pairs of optical glasses, two pairs of sunglasses, eleven CD’s and nine books. Did I mention the $5000 we spent on treatments for him when he was a puppy and developed pneumonia? We’re going on a cruise in June and it’s going to cost about $180 to board him. Frankly I think we’d be better off selling him by the pound.

The glasses were on my desk but not pushed back far enough. As it is, we pull the chair out so he doesn’t get up as well as pushing everything on the desk back. Although short, basset’s are long and have quite a reach. He’s the first one that we have had that is so destructive, although Satchmo used to have a thing for shoes…ask my wife.

It’s pretty obvious Beckham is frustrated and acting out. We blame Bush…