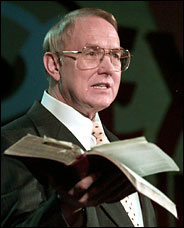 The American Taliban is off to a running start in 2005. The lesson here, as he and his ilk plunge headfirst into openly partisan campaigning and smear-tactics, is that the Democrats cannot continue to be well-worn doormats while the Right continues its holy war. The high profile stance that Dobson is now taking ensures an opportunity to over-reach and embarrass him; Dems need to take advantage of this. Evangelical Leader Threatens to Use His Political Muscle Against Some Democrats (NYT):

In a letter his aides say is being sent to more than one million of his supporters, Dr. Dobson, the child psychologist and founder of the evangelical organization Focus on the Family, promises “a battle of enormous proportions from sea to shining sea” if President Bush fails to appoint “strict constructionist” jurists or if Democrats filibuster to block conservative nominees.

Dr. Dobson recalled the conservative efforts that helped in the November defeat of Senator Tom Daschle of South Dakota, the Senate minority leader who led Democrats in using the filibuster to block 10 of Mr. Bush’s judicial nominees.

“Let his colleagues beware,” Dr. Dobson warned, “especially those representing ‘red’ states. Many of them will be in the ‘bull’s-eye’ the next time they seek re-election.”

He singled out Ben Nelson of Nebraska, Mark Dayton of Minnesota, Robert C. Byrd of West Virginia, Kent Conrad of North Dakota, Jeff Bingaman of New Mexico and Bill Nelson of Florida. All six are up for re-election in 2006.

“James Dobson needs to take a moment to focus on the facts,” Mr. Manley said. He called Dr. Dobson a “front for the White House.”

…In an interview in his office in Colorado Springs, Dr. Dobson acknowledged that his plunge into partisan politics had irrevocably changed his public image. “I can’t go back, nor do I want to,” he said. “I will probably endorse more candidates. This is a new day. I just feel a real need to make use of this visibility.”

He said that despite initial concerns, his political activities did not appear to have diverted donations from Focus on the Family. He created a sister lobbying organization during the last election, and the two organizations’ combined budgets grew to a projected $146 million in 2004, from about $130 million in 2003, with a target of $170 million for 2005.

And Actual Freeper Quotesâ„? on this. Pay attention, lame-ass Dems — Freepers are just as afraid of Dobson over-reaching, as they are about Falwell, but they are counting on Dems to not respond forcefully.

“Folks, we target these Libs (whether Democrat or RINO) regardless of the SCOTUS outcome. Clean house from top to bottom, Senate and CIA, every Governator’s mansion, every SCHOOL BOARD member has got to have the Constitution held like a gun to their head. If that doesn’t work, we must get judges in office that will UPHOLD the Constitutional rope to the neck. Don’t trust a one of ’em! Even our “good guys” in office…lest they be corrupted, or forget… Accountability! Accountability! Accountability!”

“It would be more effective for Mr. Dobson to be all action and no talk, rather than the opposite. Issuing threats is going to rile a lot of moderate voters.”

“Ok, but his threats aren’t very helpful. They will accomplish nothing except alienate people who otherwise might be persuaded by him. People don’t like threats. He should stick to actually doing what he claims he can do.”

Don’t underestimate Dobson’s passion or ability to do just what he says….and more power to him if he can pull this off. He has earned his right to speak out……..he has tirelessly worked toward the common good for all families….and has a huge following. He has been the voice of reason on the airways (radio & TV, plus the lecture circuit) for almost 30 years. This is a Godly man and I honor him. Oh yes, and PLEASE let it be true Bill Nelson is on this list……oh please, please!!!!!—-We Floridians have had our fill of him!”

“Good for Dobson; it’s time the Republicans found a way to get these mainstream Americans confirmed.”