Why they must be stopped — the wingnut bloodthirst for power 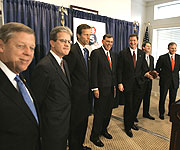 This is why Dems cannot lie down like dogs. (USA TODAY):

“The election was a mandate for conservative leadership in Washington,” declared the new chairman of the House Republican Study Committee. The conservative caucus has grown from 40 members in the late 1990s to about 100 in the new Congress — not including five conservative former House members who are moving to the Senate.

Exit polls indicate social conservatives voted in about the same proportion as in 2000. But Pence and others credit them with President Bush’s margin of victory over Democrat John Kerry and say the election was a referendum on conservative values.

For conservative Republicans, it’s also a new chance to enact their agenda — whether it jibes with the president’s or not.

The wingnuts have their plan outlined, clearly and in boldface. What is going to be the Dem response? How are they going to frame the debate, or are they just going to be steamrolled?

Conservatives say they plan to pursue new, stalled and previously defeated initiatives, including:

•Abortion limits. Sen. Sam Brownback, R-Kan., will reintroduce a bill that would require those who perform abortions after 20 weeks to tell mothers that their fetus feels pain and to offer it anesthesia. The Bush administration has not declared a position but argued during last year’s successful effort to ban late-term or “partial birth” abortions that fetuses feel pain. “This was a very clear election cycle. … The country has shifted. You’ve got a pro-life electorate,” Brownback says.

•Gay marriage. Congress failed last year to pass a constitutional amendment defining marriage as a union of a man and a woman. But since 11 states approved initiatives against gay marriage, conservatives say they have momentum. Deborah Pryce of Ohio, who chairs the House Republican Conference, predicts the amendment, which Bush supports, will be voted on again.

•Spending. Rep. Ernest Istook, R-Okla., will resubmit a long-shot balanced budget constitutional amendment that would oblige the government to spend no more than it takes in. The House passed the measure in 1997, but the Senate was one vote short at a time when it also had 55 Republicans. If approved by Congress, the amendment must be passed by three-fourths of the states to become law.

[Good luck on this one — it’s their president (and a GOP Congress) that busted the budget. –Pam]

•Environment. Several new Republican senators favor oil drilling in Alaska’s Arctic National Wildlife Refuge. They could give Republicans the last few votes needed to pass the controversial provision as part of a larger energy bill stalled in the Senate.

•Clergy and politics. Rep. Walter Jones, R-N.C., will reintroduce a bill that would make it legal for churches to participate in political campaigns without losing tax-exempt status. It’s not clear whether Bush will weigh in on the issue.

Why they must be stopped — the wingnut bloodthirst for power