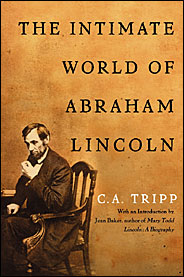 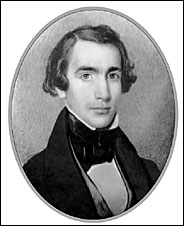 The cover of the book; Joshua Speed, with whom Lincoln shared a bed for four years. (Filson Historical Society, Louisville, Ky.)

The subject of the 16th president’s sexuality has been debated among scholars for years. They cite his troubled marriage to Mary Todd and his youthful friendship with Joshua Speed, who shared his bed for four years. Now, in a new book, C. A. Tripp also asserts that Lincoln had a homosexual relationship with the captain of his bodyguards, David V. Derickson, who shared his bed whenever Mary Todd was away.

In “The Intimate World of Abraham Lincoln,” to be published next month by Free Press, Mr. Tripp, a psychologist, influential gay writer and former sex researcher for Dr. Alfred C. Kinsey, tries to resolve the issue of Lincoln’s sexuality once and for all. The author, who died in 2003, two weeks after finishing the book, subjected almost every word ever written by and about Lincoln to minute analysis. His conclusion is that America’s greatest president, the beacon of the Republican Party, was a gay man.

But his book has not stopped the debate. During the 10 years of his research, Mr. Tripp shared his findings with other scholars. Many, including the Harvard professor emeritus David Herbert Donald, who is considered the definitive biographer of Lincoln, disagreed with him. Last year, in his book “We Are Lincoln Men,” Mr. Donald mentioned Mr. Tripp’s research and disputed his findings.

Mr. Tripp was the author of “The Homosexual Matrix,” a 1975 book that disputed the Freudian notion of homosexuality as a personality disorder. In this new book, he says that early biographers of Lincoln, including Carl Sandburg, sensed Lincoln’s homosexuality. In the preface to the original multi-volume edition of his acclaimed 1926 biography, Sandburg wrote: “Month by month in stacks and bundles of fact and legend, I found invisible companionships that surprised me. Perhaps a few of these presences lurk and murmur in this book.”

Sandburg also wrote that Lincoln and Joshua Speed had “streaks of lavender, spots soft as May violets.” Mr. Tripp said that references to Lincoln’s possible homosexuality were cut in the 1954 abridged version of the biography. Mr. Tripp maintains that other writers, including Ida Tarbell and Margaret Leech, also found evidence of Lincoln’s homosexuality but shied away from defining it as such or omitted crucial details.

As is my custom, I went over to Freeperland to read how this revised history lesson went over. As you can imagine, not well.

Look for Oliver Stone to do a Lincoln movie next.

If this is true, they need to take Lincoln off the penny and $5 bill NOW.

NYSlimes is still pressing their agenda. I get so tired of the rewrite of history to conform to a particular agenda. What is next, Christopher Columbus was gay?

Liberal historians have been pushing this for years. While working on my history degree at Texas A&M;, I can’t even count how many times some idiot liberal would try to prove to the class that everyone in the last 2000 years from Jesus to Ronald Reagan was homosexual. They could rarely offer any proof (the exception being a few famous Romans) and would sooner or later resort to name calling and attacking those who disagreed with them.

Oh good grief! Considering Lincoln referred to homosexuals as sodomites (Jefferson thought they should be executed) ….this is to stupid by half.

They will not rest until they have dragged the name of every honorable dead man in history through this mud in an effort to tarnish their images and advance an agenda.

Anything to smear a great American.

[My personal favorite one below — Pam]

I’m not buying it. People were different then. Like it says, men sleeping together was no big deal. Sleeping arrangements were just different. The guy who had the room that Lincoln died in continued to sleep in the same bed for a couple of years, I believe, kind of proud to sleep in the bed where the President died. Even when I was a boy, if you got a massage, a man would always have a man do it — unless he was visiting a whore. Likewise, skinny-dipping was a same sex sport, and lounging in the nude in the YMCA wasn’t creepy at all like it is now.

Next we will hear he had a homosexual relationship with a slave.

Sick man pushing his sick ideas and perverted mind from the grave.