The shell game is over — GOP eyes Social Security cuts 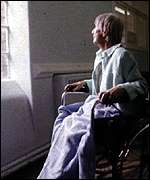 Why does George Bush hate seniors of the future? After all of the brouhaha about creating private investment accounts during the campaign, the GAO lays it on the line thatthere’s no way to save Social Security without cutting benefits. Didn’t Kerry warn about this? Oh that’s right…59 million of you weren’t paying attention to that. (NYT):

As President Bush gears up for a major public push to overhaul Social Security, he has focused almost all his rhetorical energy on the need to let people divert some of their taxes to private retirement accounts.

But nearly every leading Republican proposal on Capitol Hill acknowledges that private accounts by themselves do little to solve the system’s projected shortfall of at least $3.5 trillion. Instead, those proposals rely on deep cuts in benefits to future retirees.

That uncomfortable political truth was driven home on Monday by the head of the investigative arm of Congress.

“The creation of private accounts for Social Security will not deal with the solvency and sustainability of the Social Security fund,” that official, David M. Walker, comptroller general of the Government Accountability Office, said in a speech on Monday.

But the biggest single idea is included in the plan the White House most often points to, abandoning the practice of setting benefits as a share of people’s pre-retirement earnings.

Analysts affiliated with both political parties say that that one change could save more than $10 trillion over the next 75 years, more than enough to wipe out Social Security’s projected shortfall. People retiring today or even in the next 10 years would feel almost no impact.

But in decades to come, analysts say, many people would see sharper drops in their incomes when they retired. And because benefits would not keep up with wages, many retirees could feel steadily poorer compared with neighbors who still work.

The shell game is over — GOP eyes Social Security cuts