Who had their hand in the cookie jar? Istook: "Not me!" 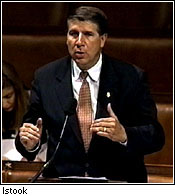 The above is a little ditty my aunt Judi used to sing to me, btw. Anyway, Oklahoma Republican Ernest Istook is scurrying away from any association with a measure in the omnibus spending bill that would allow lawmakers and staffs to review anyone’s tax returns. He is the chair of the appropriations subcommittee for goodness sake. (NYT):

… he said on Monday that a measure allowing some lawmakers and their staffs to examine Americans’ income tax returns had been inserted in a huge spending bill by a staff assistant without his knowledge.

“I didn’t write it; I didn’t approve it; I wasn’t even consulted,” Mr. Istook, a Republican from Oklahoma, said in a statement issued by his office. On Sunday, Mr. Istook issued a statement saying “nobody’s privacy was ever jeopardized,” but he did not deny any responsibility for the measure.

The chairman of the full Appropriations Committee, Representative C. W. Bill Young, Republican of Florida, said in a separate statement that the provision had been written by the revenue service at the request of the committee’s staff and “was simply an attempt to exercise our constitutional stewardship of the I.R.S. budget request, with no intention to review or investigate individual tax returns.”

The provision, one sentence in the 3,000-page omnibus spending bill that cleared Congress on Saturday night, states, “Hereafter, notwithstanding any other provision of law governing the disclosure of income tax returns or return information, upon written request of the chairman of the House or Senate Committee on Appropriations, the commissioner of the Internal Revenue Service shall allow agents designated by such chairman access to Internal Revenue Service facilities and any tax returns or return information contained therein.”

During the House debate on Saturday afternoon, there was an exchange between Mr. Young and Representative Bill Thomas, Republican of California, in which Mr. Thomas said he understood that the provision “provides the Committee on Appropriations with proper access to I.R.S. facilities for oversight purposes but not the ability to examine individual tax returns, data or information.”

Few people were paying attention to that exchange, and when Senator Kent Conrad’s staff learned of the provision, he and other senators from both parties demanded that it be negated. The Senate unanimously passed a resolution on Saturday stating that the provision “shall have no effect.”

…”Of course, people’s privacy would have been jeopardized,” Mr. Conrad, a Democrat from North Dakota, said at a news conference in the Capitol. It “would have provided unfettered power to chairmen of the Appropriations Committees now and in the future to assign agents to go review people’s tax returns and to reveal them to the public without any civil or criminal penalty.”

Who had their hand in the cookie jar? Istook: "Not me!"