In an article in the Florida Times-Union, Jeb Bush apparently said “no” to a Florida state amendment to ban gay marriage. Cheryl Jacques of Human Rights Campaign just wrote a letter thanking him. 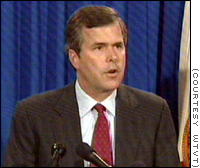 This has sent Freepers over the f*cking edge in confusion…

“Well if ole Jebbie decides to run for prez, he won’t get my vote or support.”

Based on this alone, I think he makes it crystal clear he has no intention of doing so.

This is disinformation. This gay-rights group is using a time-honored agitprop mechanism to drive a wedge between a politician who in reality does not share their views and his supporters, by offering congratulations for something he has not done towards a position that they advocate.

Judging from the variety of knee-jerk reactions on this thread, this tactic appears to work now just as well as it ever did. Unfortunately.

Yes, this is typical of the homosexual activists. Since they have no morals, deception is no problem for them.

Gov. Jeb Bush said he “would not support” a campaign by Florida’s Southern Baptists to amend the state constitution to ban same-sex marriages. “My belief is it’s not necessary,” Bush said Monday in Jacksonville about such an amendment.

Florida already has a Marriage Protection Act which Jeb thinks is sufficient.

Jeb is simply wrong. Of course it’s wrong that the homosexuals and other minority loud mouth groups can push their agendas through the courts, but that’s the reality of the situation here. Guaranteed: In about 2-3 years, the gays in Florida are going to be challenging the MPA, and if there is not a state consititutional amendment specifically banning gay marriage, the activist/leftists judges are going to declare the MPA “unconstitutional”. It’s time to wake up.

This was the same guy that wanted to give drivers licenses to illegal aliens in Florida.

“If there was a threat that gay marriage would be accepted in our state, then I might be supportive of it,” Bush said. “I’m not sure it’s necessary to do this in a pre-emptive fashion.”

Pure BS? Not really, according to the above. Sounds like he doesn’t support the Marriage Amendment.

“A constitutional amendment, at the state level at the very least, is the only way to keep judges from imposing homosexual “marriage.” The Federal Marriage Amendment is the only way to close the legal loophole that allows the activists judges to strike down a state law. There are federal laws on the books that state that one state has to honor another states marriage/ drivers license etc. Any elected official that does not support the FMA and claims this is a “states rights” issue is A) Ignorant of the law B) knows full well what they are doing.. Enabling judges to legislate from the bench.

The people have overwhelmingly voted to ban sodomarriage at the state level. The FMA would reflect the will of the people! Why not support it (on the state level?) Why use the old “don’t tinker with the constitution” excuse knowing full well there are pending court cases as we speak? The militant homo activists will not rest until this matter is settled one way or the other. These Elected officials need to be for or against it one way or another. so when we vote we know if we can trust them or not.

UPDATE (2:20 PM EST): Welcome folks coming over from AmericaBlog. I’ve just spared you the grief of getting your feet muddy over at Freeperville and brought over a few more fresh comments to Fresh Blend from the agitated crowd there. They really cannot handle the fact, as John says, that the Bushes are “backing off of this ‘moral majority rules the day’ crap, ever since the election.”

Some people just don’t get it. The same methods they advocate to ban gay marriage will be used to limit gun rights, free speech or freedom of religion in the future.

At least one of these people on another thread already said that the Constitution doesn’t matter.

Work towards the election of non-activist judges and politicians who would appoint them.

LOL. Same sex marriage is at the door. The situation in Massachusetts will lead to tests of the DMA within a few years.

Any efforts along those lines are far more likely to achieve the desired result, plus produce the positive side benefit of reasoned conservative decisions across the board.

That’s well and good on matters where the situation is not dire. Because of the decision in Lawrence, the SCOTUS will have no rational basis not to overturn the DMA. This will happen long before the type of generational shift you advocate would prevent it.

A constitutional amendment banning same sex marriage is very unlikely to be passed anytime in the next few decades, if ever.

On this we agree, in part. The CMA is at present an uphill battle. If it isn’t passed in the near future, it never will be.

What I think you have to acknowledge is that once the DMA is overturned, the judges you want to elect won’t be able to return the horses to the barn.

That will not be acceptable to the homosexual activists. They will insist upon forcing the issue, and the courts will abide them.

And religious freedom is a fairly important issue.

To: Fatalis; B Knotts

I agree with “dead”… if the real fight is with the courts (right?) then we better take the fight there. We’ll kill many birds with one stone, because we’ll strengthen conservative values there for other issues besides marriage.

Well if ole Jebbie decides to run for prez, he won’t get my vote or support.

A Marriage Protection Act is not the same as an amendment. It can easily be overturned by activist judges. Why wait until that happens, which IMHO will? Why not send a signal to congress that the other states are doing and make an even STRONGER case for a U.S Amendment to the Constitution. Floria has nothing to lose by doing so. By having a U.S. Constitutional Amendment, the activist judges can not mess with it. They CAN with a state law. Bty, I DO have a life, thank you.

And poor Ken Mehlman…how’s he going to handle the moral values spin as the new head of the RNC?