Monica Davies’ story in the NYT, Former G.I.’s, Ordered to War, Fight Not to Go is moving and enraging. This backdoor draft only serves to highlight that the Pentagon is wholly unprepared for another war, or even for the military obligations we currently have. A local man is featured in the article. 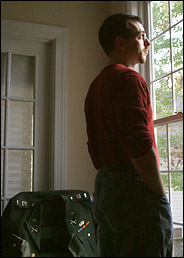 Todd Parrish, 31, of Cary, N.C., thought his obligation to the Army ended last year, but the Army disagrees. He sued the Army after his call-up. (John Loomis for NYT).

Many of these former soldiers – some of whom say they have not trained, held a gun, worn a uniform or even gone for a jog in years – object to being sent to Iraq and Afghanistan now, after they thought they were through with life on active duty.

They are seeking exemptions, filing court cases or simply failing to report for duty, moves that will be watched closely by approximately 110,000 other members of the Individual Ready Reserve, a corps of soldiers who are no longer on active duty but still are eligible for call-up.

…Others say they do not believe they are eligible to be returned to active duty because, they contend, they already finished the obligations they signed up for when they joined the military. A handful of such former soldiers, scattered across the country, have filed lawsuits making that claim in federal courts.

These former soldiers are not among the part-time soldiers – reservists and National Guard members – who receive paychecks and train on weekends, and who have been called up in large numbers over the last three years.

Instead, these are members of the Individual Ready Reserve, a pool of former soldiers seldom ordered back to work. Ordinarily, these former soldiers do not get military pay, nor do they train. They receive points toward a military retirement and an address form to update once a year.

…Colette Parrish said she burst into tears the evening that her husband, Todd, walked into their house in Cary, N.C., with a letter from the Army calling him back to service. “We had no idea this could happen,” she said. “We hadn’t been preparing for any of it because we thought it wasn’t possible.”

At first, Mr. Parrish, 31, said he was convinced that the letter was just an administrative error because he believed that his time in the Individual Ready Reserve had ended.

He had gone to college on an R.O.T.C. scholarship, then served four years as a field artillery officer. He said he resigned his commission after that, became an engineer, and still owed the Army four years in the Individual Ready Reserve to complete his total obligation.

To Mr. Parrish, who has filed a lawsuit against the Army in federal court in North Carolina, that obligation ended on Dec. 19, 2003. But the Army apparently does not agree, and says that it never accepted Mr. Parrish’s resignation as an officer.

As the court fight has continued, Mr. Parrish’s date to report to Fort Sill, Okla., has been pushed back, again and again, one month at a time. Instead of thinking about long-term plans, for his wife and their future family, he is living in 30-day increments.

He said he always looked back on his service years fondly, and with a deep sense of patriotism.

“I guess I feel disillusioned now,” he said. “This isn’t about being for or against the war. It’s not about Democrats or Republicans. It’s just a contract, and I don’t think this is right. If they need more people, shouldn’t they get them the right way? How many more like me are there?”