Who wants to protect this cracker? 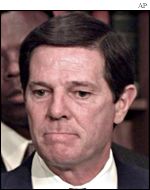 House Majority Leader (and former pesticide salesman) Tom DeLay’s supporters want to propose some House rules changes that will preserve his leadership position if he is indicted in Texas.

The Texas grand jury is investigating alleged campaign finance irregularities in 2002 state legislative races. Republican victories in those contests enabled DeLay ultimately to win support for a congressional redistricting plan that resulted in the GOP’s gain of five seats in this month’s elections.

House Democrats have a step-aside provision that applies to chairmen or ranking members of committees who are charged with felonies. The language is silent on top party leaders, but Democratic Leader Nancy Pelosi of California was nonetheless sharply critical of the proposal to protect DeLay.

“If they make this rules change, Republicans will confirm yet again that they simply do not care if their leaders are ethical. If Republicans believe that an indicted member should be allowed to hold a top leadership position in the House of Representatives, their arrogance is astonishing,” Pelosi said.