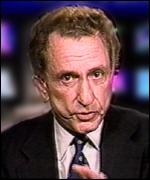 Guess Arlen Specter has to lick some boots to get chair of the Senate Judiciary committee. The fundies want his head.

Conservative groups want senators to pass over Specter for the chairmanship because of his postelection comment that anti-abortion judges would be unlikely to be confirmed by the Senate.

Specter, who is an abortion rights moderate, has been calling and meeting with senators individually to assure them he wouldn’t personally block Bush nominees from being voted on by the full Senate.

The senator now wants to go in front of the GOP’s Judiciary Committee members and hash things out next week in a private meeting, said Sen. John Cornyn, R-Texas, a committee member.

The GOP committee members get the first vote on whether Specter will replace current chairman Orrin Hatch, R-Utah, who is stepping down because of party-imposed term limits. Whatever decision they make can be appealed to the full GOP caucus later.